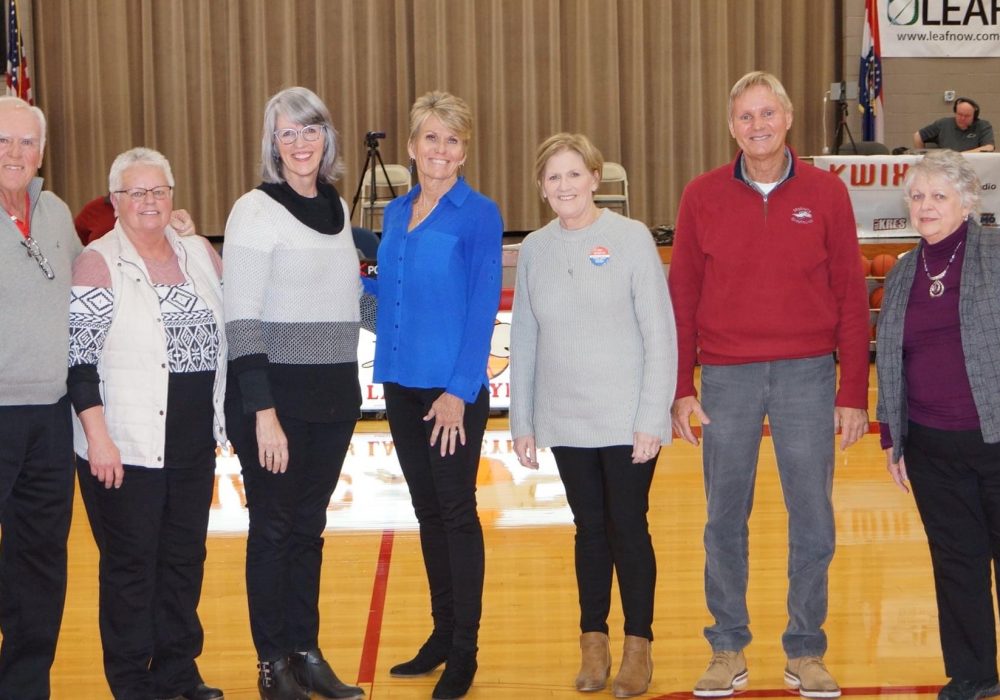 The team enjoyed a Friday evening reception as part of their 40-year reunion and met with the current Lady Greyhound team Saturday morning, where a wonderful bond was struck. After a lunch catered by Papa Rocks Catering, Susanna Freeman opened the program by welcoming everyone and sharing President Jeff Lashley’s regrets for his absence. Michele McCall introduced current Lady Greyhound Coach Hana Haden who then shared with the crowd gathered how the current team is doing, along with their goals for the season and appreciation of time shared with the reunion team earlier that morning. Former Greyhound Coach Dick Halterman and former Assistant Coach John Cochran then introduced the 1980-81 Lady Greyhound team and inducted them into the Hall of Fame. They were followed by current Greyhound Coach Pat Smith, who introduced Nancy Ketchum and inducted her into the Hall of Fame as well.

At the national tournament, the Lady Greys defeated the team from Mesa, Arizona, and won a triple-overtime quarterfinal game over Murray State. Advancing to the semifinal game, the Lady Greyhounds beat undefeated Jackson State before eventually losing the national championship game to Louisburg, North Carolina, with a final score of 65-63.

Nancy Ketchum is the very first MACC staff member to be inducted into the Greyhound Hall of Fame. She served as Greyhound Athletics Advisor, 1996-2005.

Nancy Ketchum founded our student athletics succuss program as the advisor, tutor, and mentor to MACC student-athletes. She spent hours in the Learning Center working with the athletes and help them succeed and graduate. At many Greyhound reunions and events, players have said they wouldn’t be the person they are today without the support of Ms. Ketchum. Her passion for student success is second to none, and she diligently worked to motivate all athletes to be successful on and off the court. Not only did she help them with academics, but she also helped them with general life challenges. Nancy was a rock-solid constant in their lives while they were students at MACC and then on to their next school. They often would call or email Nancy to ask her opinion of anything they questioned in life. She became a lifelong confidant. Nancy was an expert in the transfer of courses and knew what each of the transfer colleges would be looking for in the academics of a student-athlete. As one of the most skilled faculty advisors at MACC, it was natural for Nancy to take on the role of advisor for the Greyhounds. She was also a huge Greyhound fan. She missed very few games over the years, and she is still an avid supporter of the teams.

Former Greyhound C.J. Pepper was scheduled to be inducted also, but wintry weather kept him from being able to attend. He will be inducted at the upcoming MACC Athletic Banquet.